Forlì preserves significant traces of both the Romanesque period and the Renaissance, which had the resolute and combative Caterina Sforza governing the city. Remarkable are also the architectural evidences of the rationalist period of the Twenties and Thirties.

In the historical center, are recognizable the two main streets of Roman origin, divided into four main courses that converge on the central Piazza A. Saffi. This square is overlooked by some of the most representative buildings of the various periods of the city such as, for example, the Romanesque basilica of San Mercuriale with its imposing original bell tower of the twelfth century, the Municipal Palace, seat of the City Hall, dating back to the fourteenth century and renovated several times, with the Civic Tower (or Clock Tower) the fifteenth-century Palazzo del Podestà and Palazzo Albertini, home to interesting exhibitions; the twentieth-century Palazzo delle Poste, an imposing structure of the Ventennio, a period of which we find significant traces in the buildings of Viale della Libertà and Piazzale della Vittoria, near the railway station.

The dominion of the Ordelaffi family over the city, which lasted about two centuries, enriched Forlì with numerous noble palaces which can still be admired when walking along the streets of the historical center. Pino III Ordelaffi was responsible for the fortification of the Fortress of Ravaldino, completed in 1480 and now named after Caterina Sforza. Noteworthy is also the baroque style of Forlì, with two prestigious monuments recently restored: the Church of Suffragio, at the entrance of Piazza Saffi and, not far away, the Church of San Filippo Neri, in Via G. Saffi.

Definitely worth a visit is the museum complex of San Domenico, in the heart of the historic center: the museum is home to the oldest section of the Art Gallery and houses the famous Hebe by Canova. In recent years it has hosted prestigious exhibitions: from Palmezzano to Silvestro Lega, from G. Cagnacci to Canova.

Lying a few kilometers from the Adriatic Sea, Ravenna is recognized as the capital of mosaics. A true treasure chest of art, history and culture, where even today there are many traces of its past that led it to be the capital, in different eras, of three empires: the Western Roman Empire, the Ostrogothic Kingdom and the Byzantine Exarchate.

Majestic and splendid evidences of the glorious past are evidenced by Ravenna’s monuments, basilicas, mausoleums and baptisteries, which cherish the richest heritage of mosaics dating back to the V and VI century. Apart from boasting eight monuments included in the list of UNESCO World Heritage Sites, Ravenna also cherishes the mortal remains of Dante Alighieri. 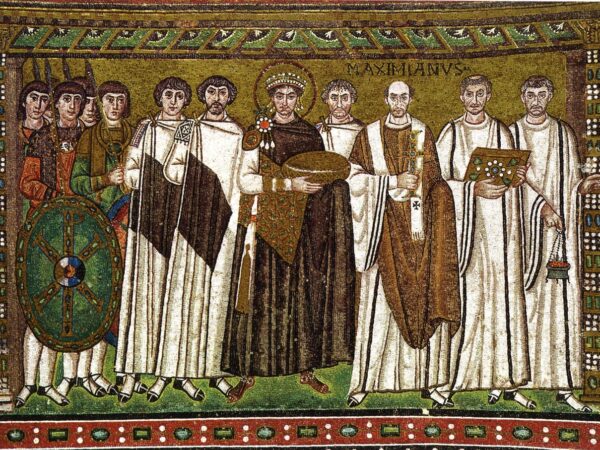 Between Forlì, the Adriatic Sea and the Apennine ridge, lies Cesena, an important city of art and one of the seats of the ancient seigniories of Romagna. Despite a brief duchy of the Borgias and the subsequent domination of the Papal State, the most historically significant legacy was that of the Malatesta family, and it is to them that we owe many of the works that are now points of great cultural interest and tourist destinations.

The most famous site of the city is undoubtedly the Malatestiana Library (UNESCO), the first Italian civic library, as well as the only medieval monastic library still perfectly preserved, where you can admire no less than 343 illuminated codes and 48 incunabula, still bound with their original chains, in addition to 5000 volumes belonging to the private collection of Pope Pius VII of Cesena (opening: annual). 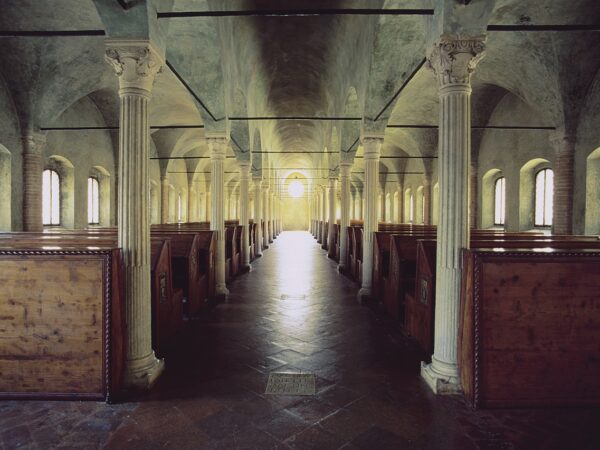 Situated in a privileged position along the millenary Via Emilia, lying just behind the first hills of the Apennines, Faenza is a beautiful city of art known throughout the world for the tradition linked to the art of ceramics. The city retains a discreet charm, with architectural peculiarities and urban masterpieces such as Piazza del Popolo, the heart of the center, where there are beautiful buildings including that of the Podestà (XII-XIII century) and the Town Hall. Special mention should be made of the elegant Masini Theater, the Renaissance Cathedral, the eighteenth-century Palazzo Milzetti and, the pride of the city’s history and artistic heritage, the International Museum of Ceramics (MIC). Founded in 1908, it is the largest collection of ceramic art in the world; in the exhibition halls are collected the works of Italian ceramic workshops from the Middle Ages to the nineteenth century, of the Ancient Near East, of the Mediterranean area in the Hellenistic, pre-Columbian and Islamic periods, as well as a rich section dedicated to Faenza’s ceramics of the Renaissance. 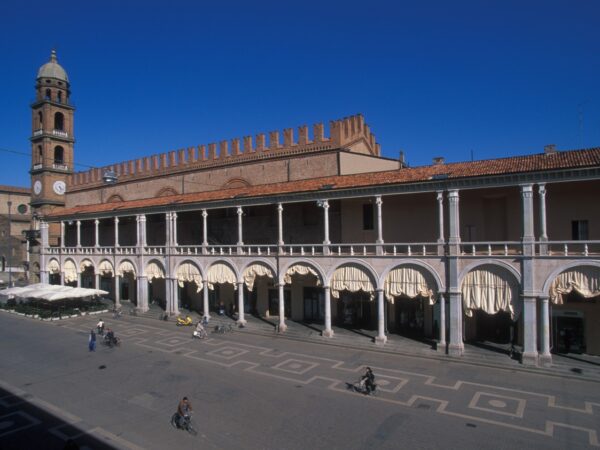 Bertinoro rises on the slopes of the first hills of the Forlì Apennines. The town is a typical example of medieval citadel that still retains intact walls, towers and old houses. From the central Piazza della Libertà you can enjoy a splendid panoramic view that extends to the sea, hence the nickname “Balcony of Romagna”. But Bertinoro is also known as the “city of wine”: legend has it, in fact, that Galla Placidia (daughter of Emperor Theodosius), passing through these places, tasted a wine served in a humble cup, and said: “not of such a crude cup are you worthy, or wine, but to drink you in gold”, hence the name of the city. From the top of the Cesubeo Mountain, dominates on the cittadella the millennial Fortress, a building anterior to the century X, where the emperor Federico Barbarossa sojourned in 1177 with its court and its militias, then Episcopalian center from 1584. Today, the Rocca houses the University Residential Center of the Alma Mater Studiorum of Bologna and the Interfaith Museum, which is unique in Italy. Recently established by the Diocese of Forlì-Bertinoro, the Museum offers the possibility to investigate the common aspects of the three great monotheistic religions, Judaism, Christianity and Islam. But the beautiful medieval town boasts another characteristic, that of being considered a “city of hospitality”, for a centuries-old practice symbolized by the “twelve-ringed column”. In the 14th century, every pilgrim arriving in Bertinoro could tie his horse to one of the rings in the column; the family to which the ring belonged could have the privilege of hosting him. A tradition recalled every year, on the first Sunday of September. 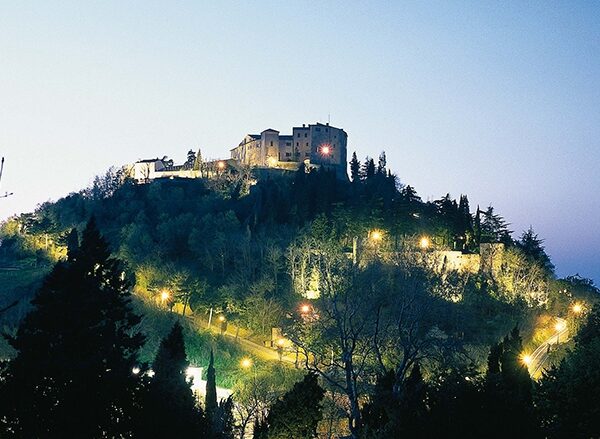 Situated in the plain of Romagna, Forlimpopoli is the town known as the birthplace of the famous man of letters and acknowledged father of Italian cooking: Pellegrino Artusi (Forlimpopoli 1820-Florence 1911). Inspired by the philosophy of this illustrious fellow citizen, Forlimpopoli was founded the first center of gastronomic culture dedicated to Italian home cooking: Casa Artusi. Housed in the monumental complex of the Church of the Servants, wisely restructured, at Casa Artusi it is possible to taste traditional cuisine and, thanks to the courses of the renowned Cooking School, perfect one’s own culinary techniques. Forlimpopoli also boasts a past rich in history: it was founded by the Romans in the 2nd century BC and today houses the small but prestigious MAF, Forlimpopoli Archaeological Museum, inside its 14th century fortress. 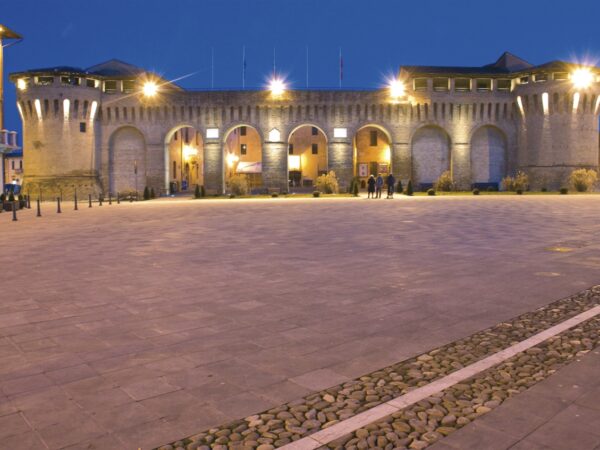 The village is located in the valley of Rabbi river, heart of Romagna Apennines, in a hilly area surrounded by precious vineyards from which Sangiovese DOC is produced, about 30 km from the Park of Casentino Forests. Its recent history is strongly marked by the figure of Benito Mussolini who worked between the 20s and 40s of the twentieth century to give prestige to the village, calling the major architects of the time. Predappio looks like a real “urban museum”, original evidence of the urban and architectural styles of Rationalism. Among the most representative buildings are the Ex Casa del Fascio e dell’Ospitalità, built between 1934 and 1937 on a project by the architect Arnaldo Fuzzi, a building of formidable effect in its size and in the contrast of red and white colors, and Palazzo Varano, for about twenty years the home of Mussolini, the current municipal headquarters. Noteworthy is then the Monumental Cemetery rearranged in 1939, on a project of the Architect Di Fausto. Inspired by the Romanesque style, it incorporates in one corner the Church of San Cassiano in Pennino, dating back to the 11th century, while it houses, on the other two opposite corners of the portico, the entrance and the chapel with the tomb of the Mussolini family. 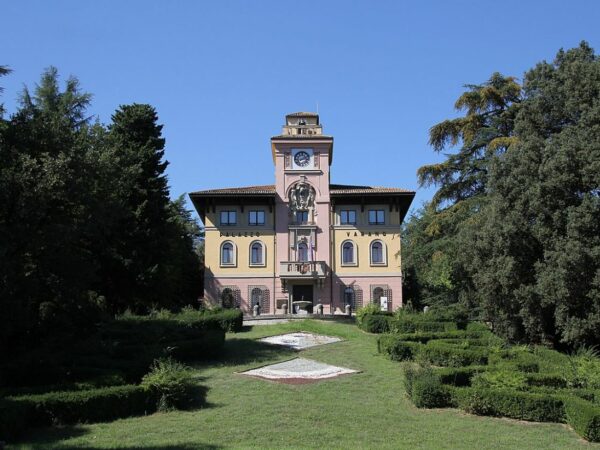 The ancient medieval village stands out for its strong vocation for hospitality and sustainable tourism, so as to be included in the club of the “Most Beautiful Villages of Italy” and certified by the Italian Touring Club with the “Orange Flag”. It also boasts important certifications such as “Città Slow” and “Città dell’Olio e del Vino”. The village is located at the foot of three pinnacles of chalk on which rest the Manfrediana Fortress of the fifteenth century, the Tower called the Clock of the nineteenth century (built on a previous fortress of 1290) and the Sanctuary of Monticino of the eighteenth century. The village, made up of a maze of cobbled streets, stretches of walls and stairs carved in chalk, encloses the ancient Via del Borgo, better known as Via degli Asini (Donkey Street) for the shelter offered to the animals of the birocciai, a raised and covered road, illuminated by arches of different widths. 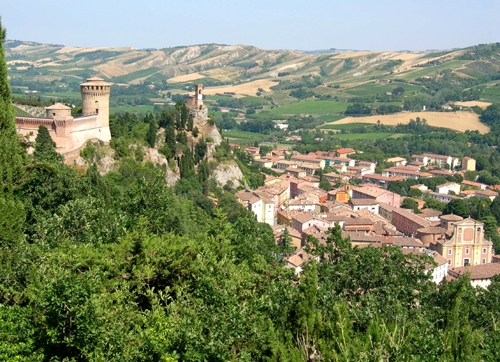 San Marino is perched on Mount Titano, in a breathtaking position. It is a natural terrace from which the view can extend and embrace both the Riviera of Romagna and the ancient Republic. As you stroll through the cobblestone streets, admiring the squares and palaces, you can’t resist the temptation of shopping among the many stores the city has to offer.

San Leo, a wonderful capital of art, mentioned by Dante Alighieri in the Divine Comedy, is the fulcrum of the historical region of Montefeltro, in the province of Rimini. From its Fortress, where Count Cagliostro died a prisoner in 1795, you can enjoy one of the most beautiful and characteristic views of the region. The view sweeps over the surrounding mountains and along the Marecchia valley as far as the sea. Known for its historical and geopolitical events, location of films and documentaries, it is a tourist destination of excellence in the region. 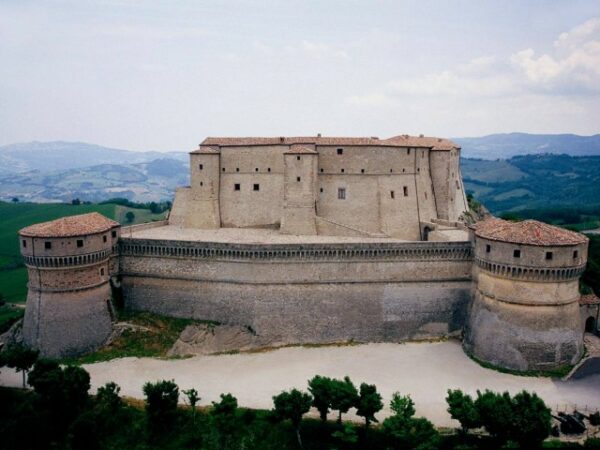