Castrocaro Terme and Terra del Sole are a real jewel in the heart of the Tuscan-Romagna Apennines. They boast an important heritage not only from a historical and cultural point of view but also in terms of food and wine and excursions.

Castrocaro Terme is known to the general public for its renowned Thermal Centre and for the 'Festival delle Voci Nuove', a popular event that has nurtured young talents into stardom.

In 2005 Castrocaro also obtained the prestigious recognition of tourist-environmental quality as the "Borgo Bandiera Arancione" (Orange Flag Village), a mark used by the Italian Touring Club to certify municipalities in the Italian hinterland that stand out for their excellent offerings and quality hospitality.

The entire municipality of Castrocaro Terme and Terra del Sole has an extraordinary historical and architectural heritage that can be traced back to the development and important role that the town played from the Middle Ages onwards. The historical centre of Castrocaro, still largely enclosed by its ancient walls, offers a charming medieval setting, enriched by Renaissance buildings and ancient monuments.

The imposing Fortress is one of the oldest castles in Italy, dating back to the late 9th century. It dominates the town and can be visited through the town's historical and archaeological museum, the Arsenali Medicei and the Enoteca of fine local wines; it is often the scene of medieval festivals, concerts and historical re-enactments.

To relive an atmosphere suspended in time, amidst sumptuous rooms, sumptuous period furnishings and exquisite decorations framed in sinuous walls, you must visit the complex of buildings inside the Parco delle Terme: the Padiglione delle Feste, in pure Art Déco style by Tito Chini, and the Grand Hotel delle Terme by Piacentini, are examples of rationalist architecture that have preserved the charm and elegance of the 1920s and 1930s.

Separated from Castocaro by a thin strip of land, Terra del Sole is a marvellous Renaissance village, an "ideal" fortified town, emblematic of the power of the Medici family in the mid-sixteenth century. The town was built by Cosimo I de' Medici in 1564 according to the urban planning canons of the time, which were based on a harmonious respect for space and volume: its walls contain palaces arranged with symmetrical regularity, in a rare example of military architecture. 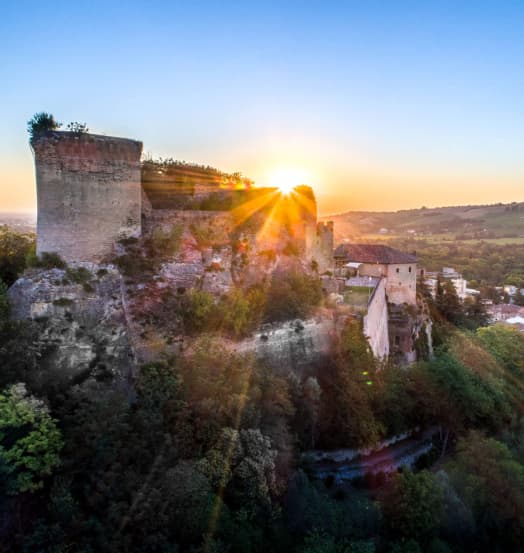 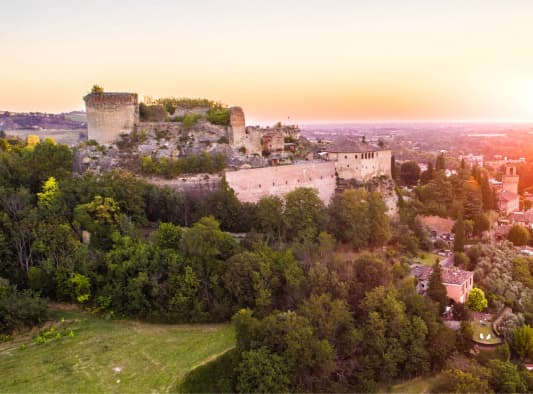 In Castrocaro Terme and Terra del Sole you can savour the best food and wine tradition of Romagna: a table full of genuine flavours including some typical local products such as fresh pasta, piadina, cold cuts and meat; the vineyards on the surrounding hills offer a range of excellent wines with a strong character, known far beyond the Romagna valleys, such as the red Sangiovese and the white Trebbiano, but also Albana, Pagadebit and Cagnina. The farms and agritourisms belonging to the "Strada dei vini e dei sapori dei Colli di Forlì-Cesena" are open all year round for visits and tastings.

Finally, this hospitable and generous territory offers many excursion possibilities: from the gentle hills to the breathtaking views of the surrounding valleys, from the surprising excursion of the "Spungone" to the beautiful River Park, where you can find harmony in contact with a luxuriant nature.

Castrocaro Terme e Terra del Sole: every visit is worth the trip

Choose the experience that suits you best